Skip to main content
It looks like you're using Internet Explorer 11 or older. This website works best with modern browsers such as the latest versions of Chrome, Firefox, Safari, and Edge. If you continue with this browser, you may see unexpected results.

Welcome to the Doctor of Ministry (DMIN) Research Project Guide!

To navigate to the different sections use the tabs above.

Examples of Keyword and Subject Searches

Save Yourself Time. Schedule a Research Appointment with an OCLS Librarian!

1. Develop your Research Question.  You may want to think about:

2. Decide what type of information you will use in your research.

Will you need print or e-books?
Academic Journal articles?
Magazine or Newspaper articles?
Web sites or other multimedia?

3. Determine the kinds information you will need.

Are you looking for current or past (historical) information?
Will you need Primary Sources or Secondary Sources?
Should you use Popular, Trade, or Scholarly Journals?
How will you evaluate the information you find for accuracy, audience, bias, or purpose?

4. Start the process of writing your paper.

5. Avoid Academic Dishonesty and Plagiarism by citing and referencing the sources you use.

Academic papers need to be align with your required writing and citation style, APA Style, or Chicago Manual of Style. 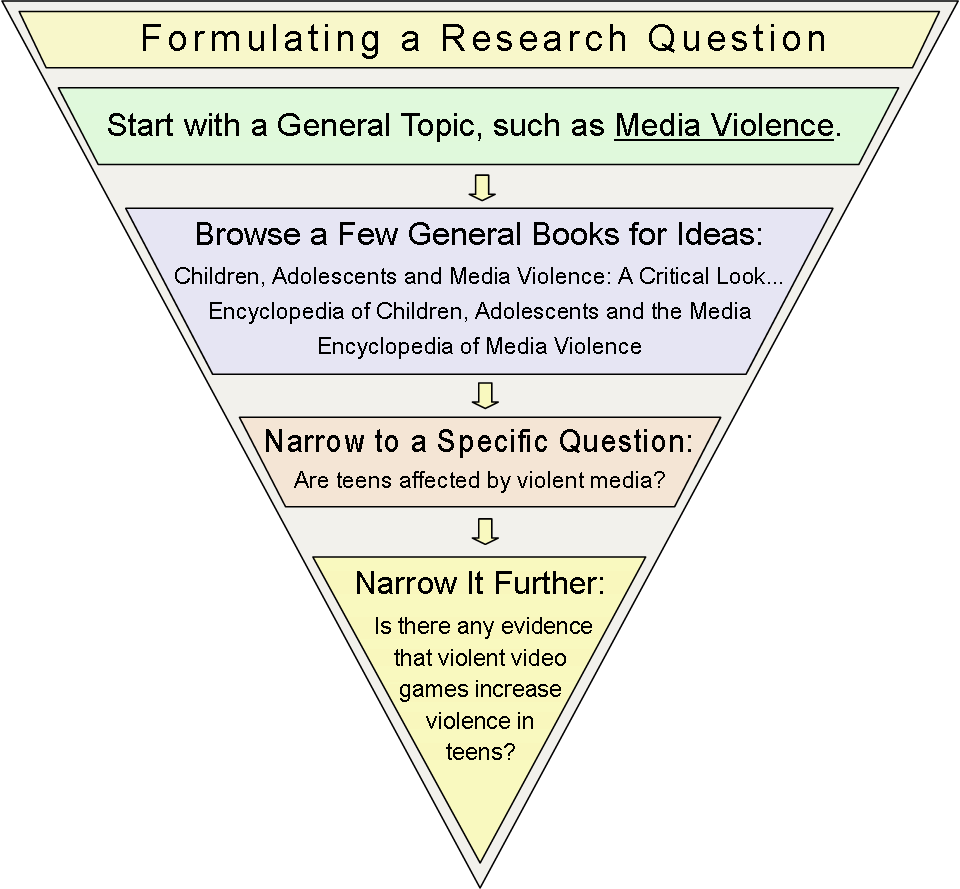 Good research explores a question without an easy answer. Narrowing a topic to a primary question will get your research off to the right start.
Questions require answers.
A topic is too broad to cover thoroughly, but a question has an answer.
A question is a way of evaluating the evidence.
A clearly stated question helps you decide what information is needed in your paper and what is not relevant.
An open-ended question calls for real research and thinking.
A question with no easy answer makes research and writing more meaningful to both you and your audience. Your research may then solve a problem or contribute to the field of knowledge.

Examples of Keyword and Subject Searches

Click Here for examples of keyword and subject searches for the following research questions:

Save Yourself Time. Schedule a Research Appointment with an OCLS Librarian!

Make a Research Appointment with an OCLS Librarian.   Options include In-Person (Face to Face), phone appointments, and Zoom calls.  For more information, call Off Campus Library Services at 1-800-521-1848

Why Use Reference Books?

Why Use Reference Books?

Start your research by scanning a reference book to generate ideas about how to narrow or search for your topic.

You'll find keywords and related topics for your search strategy. You might even create an initial outline.

Reference articles usually offer additional resources in a bibliography you can use to track down more info.

Use the links below to access these reference databases.

A database of 600 reference books and encyclopedias, as well as hundreds of topic summaries with links to further resources.

A database of electronic encyclopedias and specialized reference sources for multidisciplinary research. The eBooks are trusted and authoritative and fully searchable online.

A repository with over ten million public domain books and journals digitized through a cooperative university project. Books are searchable by title, author, subject, keyword, or full text.

Provides a wealth of Bible text and commentary, including the New Oxford Annotated Bible and five other Oxford Study Bibles. The Bible content is supplemented by major apocryphal Old and New Testament texts in translation, as well as 5,000 A-Z entries from the Encyclopedia of the Dead Sea Scrolls, Oxford Companion to the Bible, and many other Oxford reference works.

A database of over 40,000 electronic books and texts, including historically important documents and classic authors such as Shakespeare and Dickens. Offers editions for on-screen reading or download.

Statistical Abstracts of the United States

The Statistical Abstract of the United States, published from 1878 to 2012, is the authoritative and comprehensive summary of statistics on the social, political, and economic organization of the United States. It includes religion data such as religious identification, religious bodies, church membership and attendance.

United Nations Data is a new internet-based data service for the global user community. It brings UN statistical databases within easy reach of users through a single entry point. Users can now search and download a variety of statistical resources of the UN system.

The Association of Religion Data Archives

The Association of Religion Data Archives (ARDA) strives to democratize access to the best data on religion. Founded as the American Religion Data Archive in 1997 and going online in 1998, the initial archive was targeted at researchers interested in American religion. The targeted audience and the data collection have both greatly expanded since 1998, now including American and international collections and developing features for educators, journalists, religious congregations, and researchers. Data included in the ARDA are submitted by the foremost religion scholars and research centers in the world.

The Berman Jewish Databank at the Jewish Federations of North America acquires, archives and provides open access to quantitative studies and related materials on North American Jews and Jewish communities; promotes the use of its resources by its stakeholders, and encourages transparency in the public release and reporting of research on North American Jewry.

The GSS gathers data on contemporary American society in order to monitor and explain trends and constants in attitudes, behaviors, and attributes. The GSS contains a standard core of demographic, behavioral, and attitudinal questions, plus topics of special interest. Among the topics covered are civil liberties, crime and violence, intergroup tolerance, morality, national spending priorities, psychological well-being, social mobility, and stress and traumatic events. The GSS is considered one of the single best sources for sociological and attitudinal trend data covering the United States.

The National Congregations Study surveys a representative sample of America's churches, synagogues, mosques and other local places of worship. Initiated in 1998, and repeated in 2006 and 2012, the NCS is based on in-depth interviews of congregational leaders. The study documents information about worship, programs, staffing, and other characteristics of American congregations. Wave IV of the NCS will happen in 2018.

The Pew Research Center seek to promote a deeper understanding of issues at the intersection of religion and public affairs in the U.S. and around the world. Through public opinion surveys, demographic studies and other social science research, they examine the religious composition of countries, the influence of religion on politics, the extent of government and social restrictions on religion, and views on abortion, same-sex marriage, stem cell research and many other topics. Their U.S. Religious Landscape Survey is a benchmark for understanding religion in the United States. The Pew-Templeton Global Religious Futures research analyzes religious change and its impact on societies around the world.

The U.S. Religion Census offers religious data at the county level. It reports the number of congregations in every U.S. county equivalent for each of 236 faith groups. This is an update of the 1952, 1971, 1980, 1990, and 2000 studies originally done by the National Council of Churches and the Glenmary Research Center. Since 1990, the Association of Statisticians of American Religious Bodies (ASARB) has sponsored the studies.

Why Search for Ministry Projects and Dissertations? 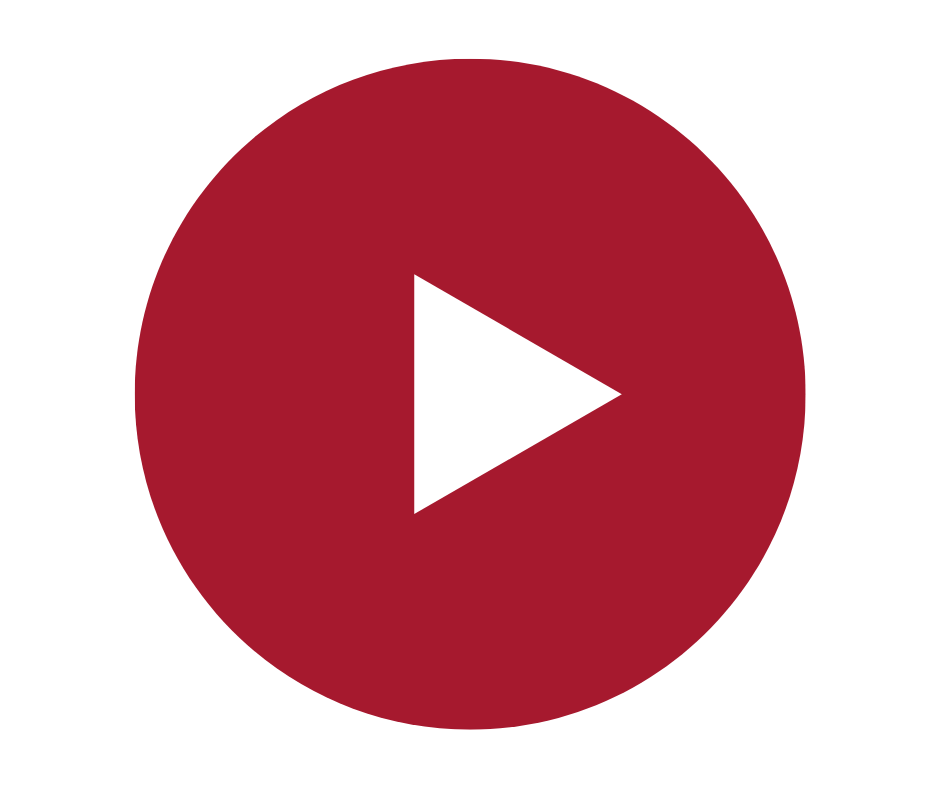 Why Search for Ministry Projects and Dissertations?

Recently published dissertations and theses offer the most current research.

If you find a dissertation with a similar topic, you can use the bibliography to inspire your own research.

Use the links below to access databases where you can find dissertations and theses. If a PDF is not available, it may be possible to get all or part of it through Interlibrary Loan (ILL).

OpenThesis is a free repository of theses, dissertations, and other academic documents, coupled with powerful search, organization, and collaboration tools.

Contains citations, abstracts, and full-text dissertations from a wide variety of disciplines.

Tren indexes over 10,000 theological theses/dissertations representing research from as many as 70 different institutions. TREN also makes available conference papers presented at annual meetings of several academic societies including the Evangelical Theological Society, the American Society of Church History, and the Society for Pentecostal Studies. This link brings up the IWU Jackson Library catalog. Tip: To sort items by publication date click on the System Sorted drop-down, select Year-Newest First and click Sort.

Research in Ministry(RIM) indexes and abstracts projects and theses from over 100 Doctor of Ministry (DMin), Doctor of Missiology (DMiss) and Doctor of Educational Ministry (DEdMin)programs accredited by the Association of Theological Schools (ATS).RIM is a searchable database with entries for authors, titles, thesis/project advisors, schools, and ATLA subject headings. Abstracts can be searched by keyword. The database also supports Boolean and proximity searches as well as nested searches and wildcards. Links have also been added to records for schools that also participate in the Theological Research Exchange Network. Please contact OCLS if you would like access to a particular project or thesis. RIM is not a full-text database.

This video shows viewers how to locate TREN (Theological Research Exchange Network) documents in the Jackson Library Catalog. TREN documents include dissertations, theses, and other graduate ministry projects. These resources may be helpful for Wesley Seminary Doctor of Ministry Research Projects.

Do you need help with a specific research topic?  Contact Off Campus Library Services and request a Personalized Search Plan!

Personalized Search Plans (PSPs) tell you where to go, what to do, and how to do it. Your PSP will suggest the best online database(s) and search term(s) to use. Depending on what kinds of information you need, your PSP might help you to find appropriate print books, e-books, or journal articles.

Each PSP includes step-by-step directions to find trusted sources for your assignments and customized to your needs.

To request your Personalized Search Plan, fill out an Online Request for Services Form and let us know your topic and what kinds of information you need – books, e-books, journal articles, websites; or, if you need peer reviewed or research-based information.

PSP requests are answered within one (1) business day, not including weekends. Requests that are received by noon on Friday will be answered that same day.

OCLS provides limited service on Saturday and is closed Sunday and all university holidays and holiday weekends, so we encourage you to ask for your Personalized Search Plan early in your workshop weeks whenever possible.